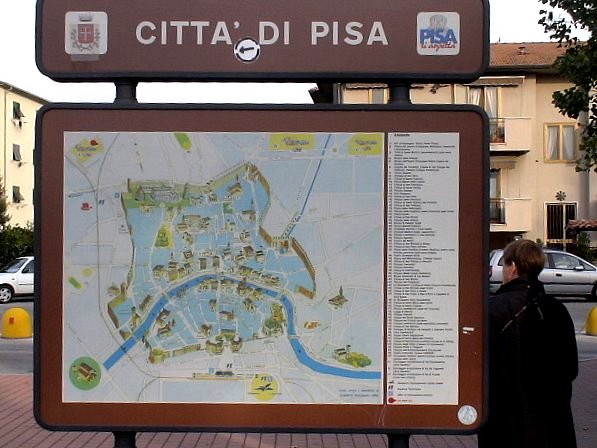 The Leaning Tower of Pisa is the campanile, or freestanding bell tower, of the cathedral of Pisa. It is situated behind the Cathedral and it is the third structure by time in Pisa's Piazza del Duomo (Cathedral Square). 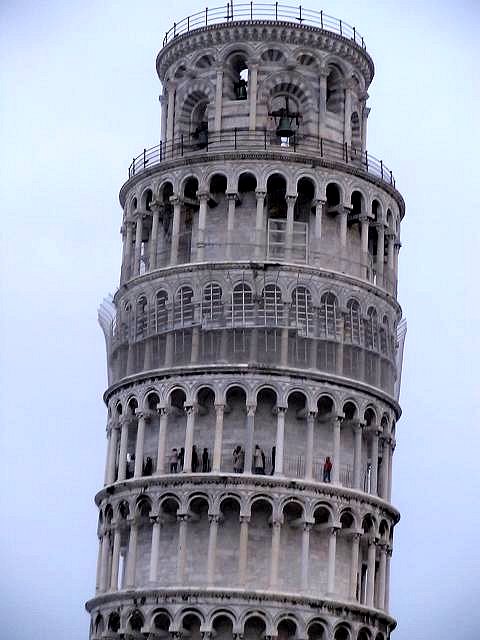 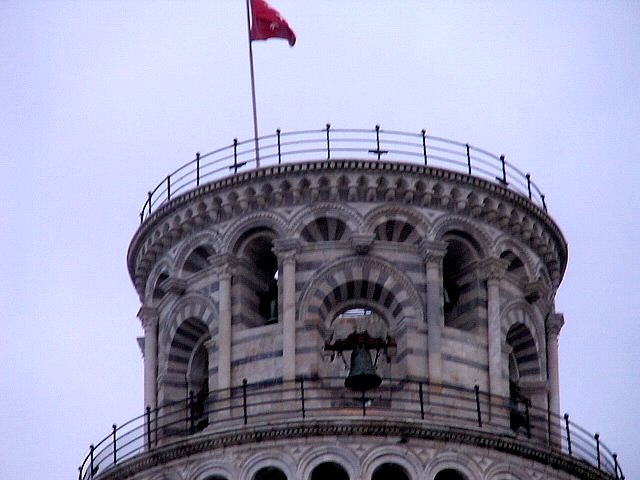 A stab at trying to hold up the leaning tower... Judy should move a little closer. :-) 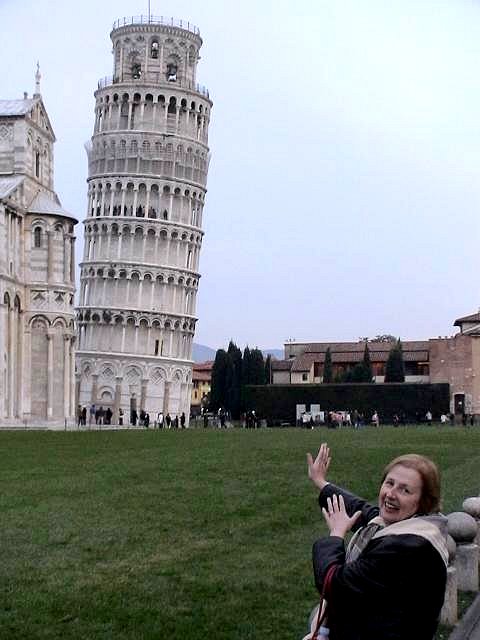 I'm getting a little closer... Just in case it leans any more.  We tried avoiding taking this obvious pic, but it was irresistible. 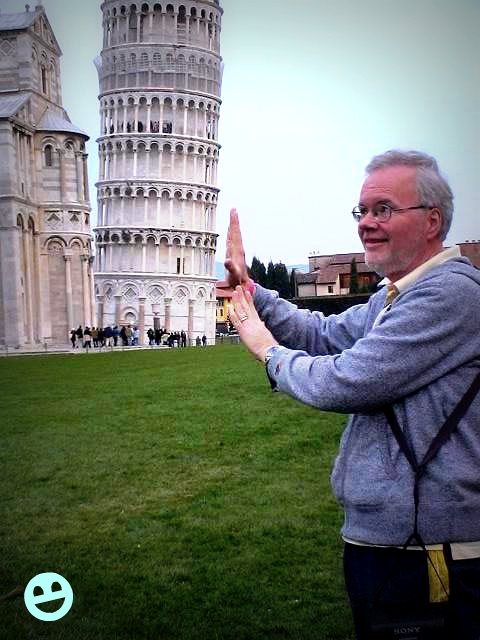 The Piazza del Duomo is a wide, walled area at the heart of the city, recognized as one of the main centers for medieval art in the world. Partly paved and partly grassed, it is dominated by four great religious edifices: the Duomo, the Leaning Tower (the cathedral's campanile), the Baptistery and the Camposanto. 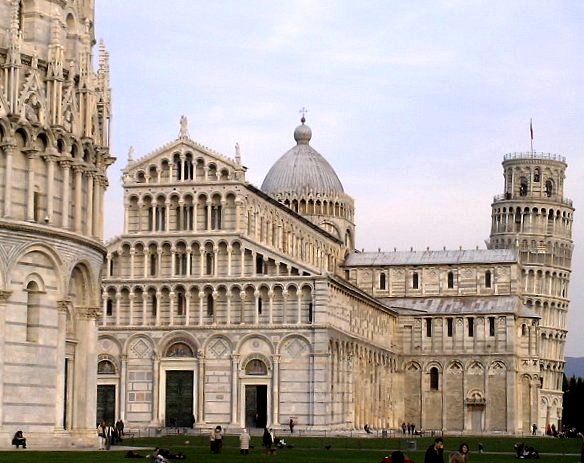 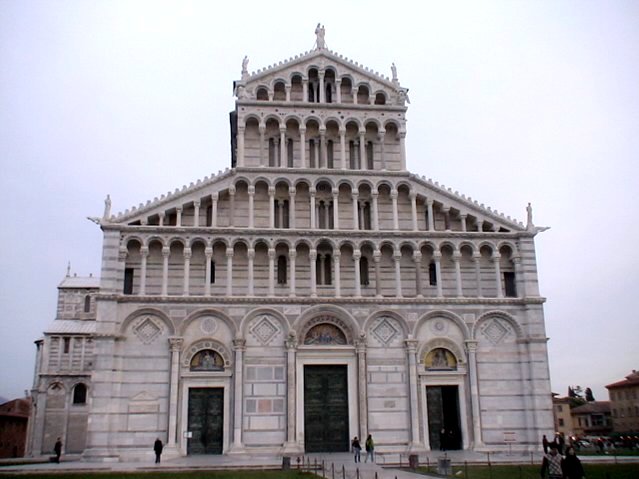 Check out the columms on the Duomo that were taken from Greek Temples. 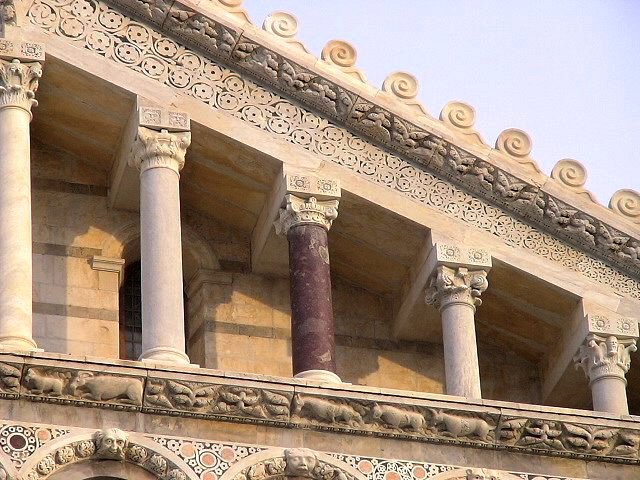 Lunettes above the Duomo's massive doors. 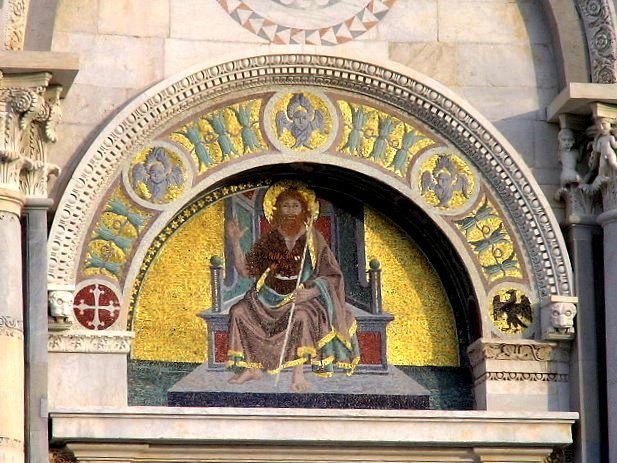 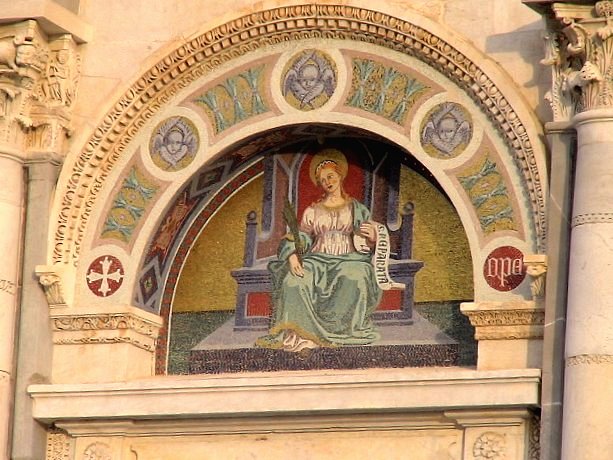 Lunette above the middle door of the cathedral, picturing Blessed Mary by Giuseppe Modena da Lucca 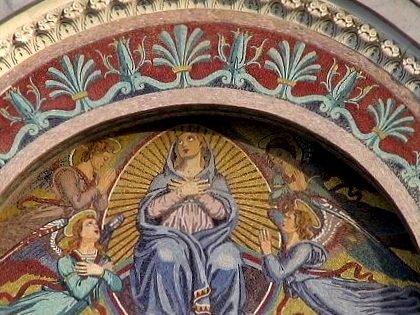 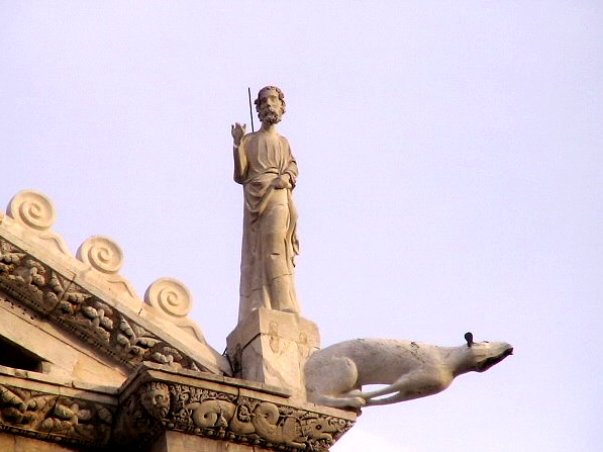 Famous lamp that Leonardo Da Vinci used in one of his experiments. (A legend...)

Do you know which one?

Giovanni Pisano's pulpit (1302-11), widely regarded as a great masterpiece. It was not always so popular, however. Those who undertook the renovations after the 1595 fire thought the old Gothic pulpit was an eyesore, so they dismantled it and stored it in a crate. It was not rediscovered until 1926; it was reassembled and once again occupies its original place on the north side of the nave.

The Baptistry of St. John is a religious building. It was begun in 1153, in replacement of an older baptistry, and completed in 1363. It is located in the Piazza dei Miracoli. 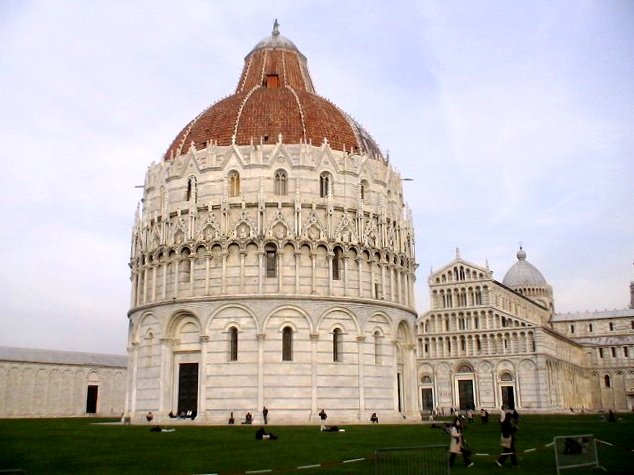 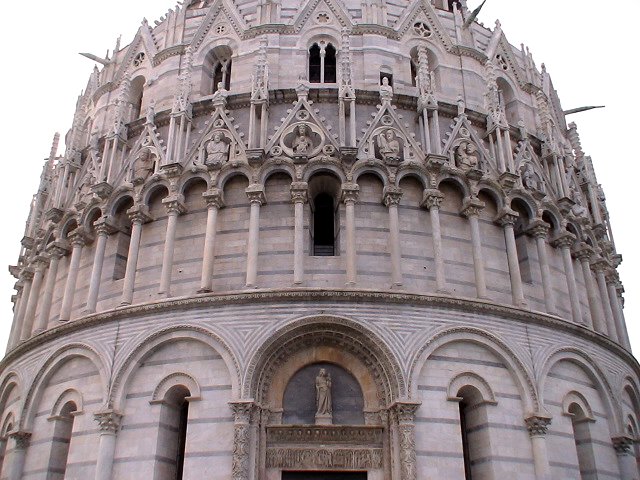 The Camposanto (the monumental cemetery) and the old Medieval city walls. 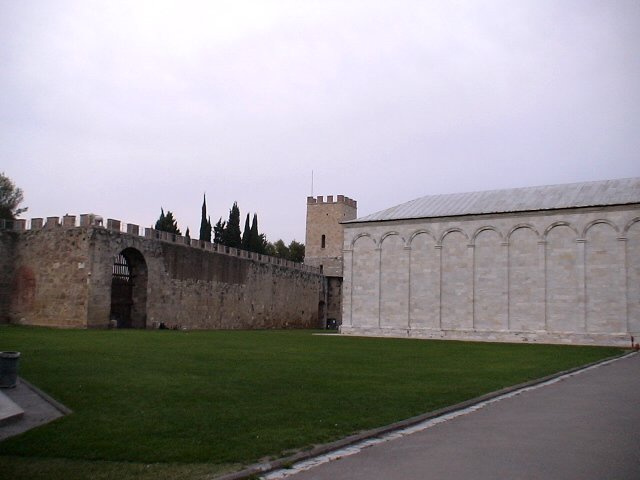 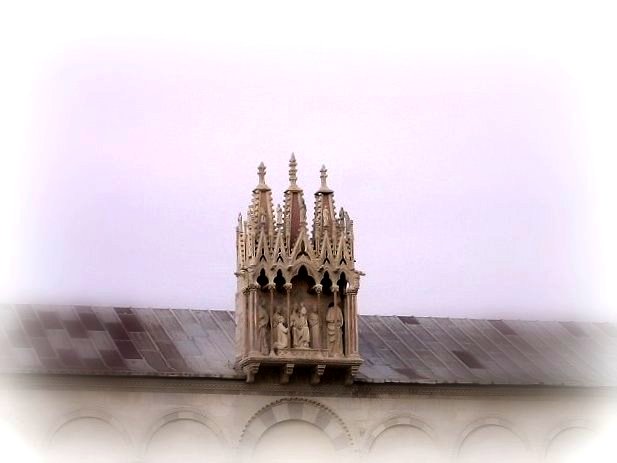 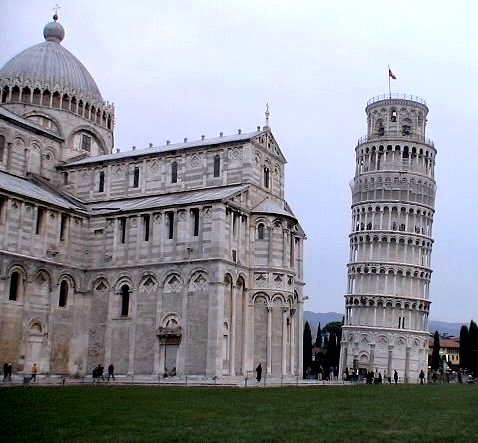 The Duomo from the side. 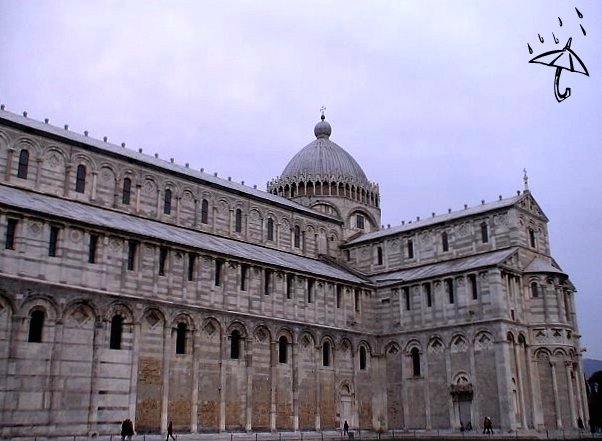 Of course, here are the multitude of shops that strectch along the old city walls. Not the prettiest part of the site, but what do you expect from one of the most visited sites in the world? 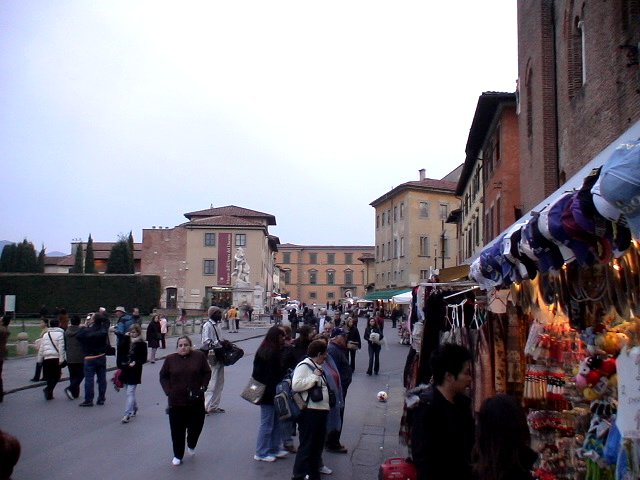 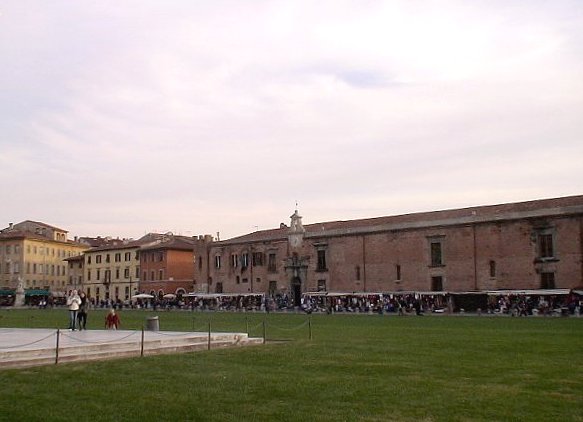