There was resistance to making Hawaii a state. Some claim it was racial issue. When someone proposed adding the all-white Alaska (Forget about those Eskimos...) at the same time, opposition to Hawaii getting statehood withered into the wind.

We cruised to all the islands. We did not stop in Molokai, where a leper colony resides. It was a lot of fun walking on the craters...towards the black sand near the Ocean. Actually, the island is growing with every eruption... and getting closer to the Mainland. Kinda like walking on a moonscape...Not that I've ever been to the Moon. The Volcano's crater... Up close ! The turret from one of the battleships that was sunk during the attack on Pearl Harbour still leaks oil to this day! Memorial to the sunken USS Nevada 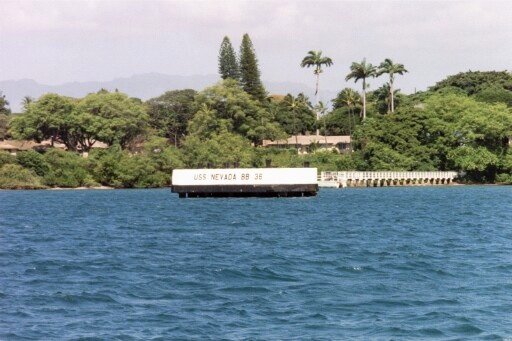 Memorial to the USS Arizona The Statendam in the background. Photo taken during our submarine ride.